Belarusian author, Sasha Filipenko, is arguably the most famous Russian-language writer in the world today. His books have been translated into many languages, and his journalistic work has been published in leading global outlets. With the author’s permission, Holod is publishing a translation of his op-ed, which first appeared in Frankfurter Allgemeine Zeitung.

Many voices throughout Europe are advocating the ban on issuing Schengen visas to the citizens of the Russian Federation. In about ten EU countries measures have already been taken to that effect: reserving an appointment at the Spanish consulate in Moscow is virtually impossible, the Italian visa center only offers slots starting November. After Ukrainian President Volodymyr Zelensky suggested this measure, it was instantly welcomed by the prime ministers of Estonia and Poland; the latter had come up with a similar initiative back in spring.

What is the purpose of this proposed legislation? According to Zelensky, if Russians were to be banned from visiting Europe, they would be more inclined to fight Putin’s regime. The Prime Minister of Lithuania is in solidarity with Zelensky’s line of thought: “The Lithuanian Foreign Affairs Minister Gabrielius Landsbergis expressed the opinion that this measure will help preserve opposition inside Russia: ‘When we’re saying that 5-10% of Russians potentially could protest against the war, we are already talking millions of people. Where would you have these millions of people be? In Russia [fighting the regime] or abroad?’”

Zelensky is the president of Ukraine, the country which has been tormented and bombed for the last six months, so his exhaustion and anger are fully understandable. However, the stance of other European leaders is questionable. The majority of European countries are still consumers of Russian gas. Russia had never turned over such a profit off of these sales as it has since the war broke out. The trade between Russia and Europe, which suffered major losses this past spring, is back on the rise. Russian tanks and other military hardware are made up of 30%-70% of European or American parts. In this war, Russia employs over 800 types of hardware built using the merchandise of European and American military enterprises. The Russian drones are a product of the collaborative efforts with Israel, while Russian armored cars run on American engines. The Kinzhal (Dagger) hypersonic missiles alone utilize 133 foreign components, while the production of other missiles is aided by Japan.

The most obvious way of proceeding for the international community seems to be to halt the supply of this military equipment to Russia so as to meaningfully aid Ukraine in this war, right? Wrong! The countries who pledge full allegiance to Ukraine in this struggle, are, simultaneously, claiming that the contracts, even those made with Russia, cannot possibly be broken. In other words, contracts are sacred, while the human right to freedom of movement is alienable.

Zelensky, jaded by the war, says: “Russians should be confined to their own world until they change their ways … They elected this government, and now they are not opposing or challenging it in any way. Russian who speak out against the war are scarce in numbers and are imprisoned. Make all Russians return, let them all go back to their homeland.”

Let me reiterate: Zelensky’s frustration is fully justified, but how does his statement account for the 400 thousand Ukrainians living in Moscow alone? Even since the 24th of February, the vast majority of these people never protested and they continue to work and pay taxes in Russia. How will they be treated if they wish to visit Europe? Would Schengen visas be issued to the inhabitants of Crimea or Kherson (Ukrainian city occupied by Russia—ed. Holod), who were forcefully granted Russian citizenship? Not long ago, in this fashion, not without a scornful smile, British and Swiss authorities told Crimeans that there was a designated place to apply for visas—in Kyiv. 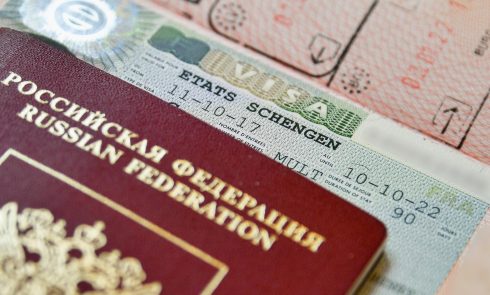 Zelensky argues that all Russians are to be held accountable as they elected Putin, whereas no more than 54 million people, in fact, did so. Moreover, inferring from the Meduza media outlet’s investigation of the latest parliamentary elections, millions of ballots may well have been falsified. Simultaneously, very recently half of Ukrainians supported the pro-Russian president Yanukovych. What about those people? Not nearly the whole country fought for freedom in Maidan (pro-European revolution in Ukraine—ed. Holod). What do we do with those who supported the move towards Russia?

However, Zelensky is right in saying that the majority of Russians are living normal lives and ignoring the ongoing war, but will a Schengen visa ban urge them to protest? Will it solve the fundamental issue of apathy and fear among the Russian people? Unlikely. First of all, only 30% of Russians are holders of a foreign passport (the main ID in Russia is a citizen’s passport; a foreign passport is secondary to that—ed. Holod). Of these 30%, I would argue, the majority are anti-Putin. Putin’s loyal electorate has never been to Europe, and neither does it want to go. Ergo, this measure will not affect the majority of Russians in the slightest. Secondly, lest we forget, anti-Putin protests in Russia peaked in 2012, which was around the time that the largest numbers of Russian tourists visited Europe, not vice versa. As hard as it is to admit, history shows that poor and secluded communities do not feel the incentive to fight for their own freedom, much less the freedom of others.

The Russian government has unleashed unprecedented oppression upon its own nation. All possible resistance to the war in Ukraine is instantly punished; including physically. How would they do it physically, you might ask? Simple: for example, right after the annexation of Crimea in 2014, France supplied Russia with riot-control equipment. Ignoring the embargo dated the same year, France sold Russia bombs, missiles, torpedos, thermal monitors for tanks, as well as navigation systems for fighter jets and choppers totaling €152 million. German manufacturers sold Russia dual purpose equipment, such as “special equipment and rifles” for a grand total of €121 million. The official statement from Berlin on the issue reads: “The current transaction was completed with guarantees provided by the Russian side that the rifles will only be used for peacekeeping purposes.” To be fair, Putin does claim that he is annihilating Ukraine strictly for peacekeeping purposes.

Should we restrict the French or the Germans from traveling to the EU as well then?

Why then does Zelensky, along with allies, declare this a matter of utmost importance, which, in reality, sounds more like hunger for vengeance, for which only Zelensky, in this context, has any right to? Because all other options have been exhausted. Populism is the only go-to method when, say, Germany is making up all sorts of excuses for delaying the supplies of heavy military equipment to Ukraine, and is struggling to promptly abandon the supplies of Russian oil and natural gas, when making money off selling military equipment to the Russians is still an attractive venture. When there’s not enough bravery for an actual stand, a government can pretend to be fighting.

The US is facing a similar conundrum. All manner of sanctions have been vainly implemented and the only option left is to declare Russia a state sponsor of terrorism. However, that will put the countries that still have business relations with Russia under strict sanctions as well. Will the US risk making that decision? The reality is that nobody is ready to admit that nobody is ready for such extreme measures.

The strategy of the anti-Russian allies seems to be the following: we can’t let Putin win, because then he will be too drunk with power and will subsequently crush half of Europe. At the same time we cannot let him fail, because then he will become enraged and, yet again, attempt to crush half of Europe. As a result, Europe is going to stick to half-measures which will eventually leave minuscule loopholes, utilizing which, they will be able to trade with Russia (including arms deals) through middleman countries.

In the modern day and age, Europe resorts to virtue signaling, which, sadly, is not even that virtuous. For example, I think that it would be infinitely smarter to keep issuing Schengen visas to Russians, but triple the application in price, while letting the Russians know that the newly added 75% of the fee will be donated to Ukraine, but alas…

Sadly, regardless of the decision that will be reached on this issue, the answer to the question: “Should a Russian be allowed to travel around Europe?” will remain: “Yes, as long as the name in his passport is ‘Natural Gas.’”

Sasha Filipenko is a Belarusian fiction and script writer, journalist and TV anchor. His books have been translated into 16 languages. He has received the Russian Award, and the Yasnaya Polyana Literary Award. He was also shortlisted for the Big Book award. In 2021, PEN International declared Filipenko a victim of censorship.